The Phase 3 KRN23 clinical trials for adults with XLH are set to begin in October. The announcement indicates that they're not yet recruiting, but we'll  update when we find out that recruiting has begun.

In the meantime, if you're considering participating in the trials, you can review the inclusion/exclusion criteria (available here: https://clinicaltrials.gov/ct2/show/NCT02526160?term=XLH&rank=1 ) and discuss your participation with trusted advisers.

You might also find the following sites useful for background information on participating in clinical trials and questions to ask:

Board member Kathy Buchanan, who has extensive experience as a clinical research nurse and is a certified clinical research coordinator, suggests that anyone considering participation in a trial should read all of the documents carefully, especially the consent form. Some questions that ought to be addressed by the paperwork, but that you may wish to ask about are: 1) how much time your involvement will require, 2) how often you'll be required to travel, 3) how often bloodwork and other lab work will be done, 4) what side effects may occur and how/when to report them. Finally, if payment is offered for participation, make sure you understand when the monies will be paid (e.g., at the end of the study or at shorter intervals).

Today's guest post is by Network member, Andrew Shortall. He was diagnosed with XLH at age two, and has become a self-taught chef, wine business person and a writer, with aspirations to become a novelist.

How familiar is that statement among XLH patients? Very! Or at least it is in my life. While I understand and accept that I have a life altering condition, I’ve always been stubbornly proud and hesitant to admit that I do indeed have a disability or handicap. The same stubborn pride that I’ve seen in other XLH patients; the thing that drives us all forward and never allows us to give up on ourselves or each other.

However, as I grow older and my condition progresses, I’m finding it increasingly difficult to continue saying I don’t have anything more than physical limitations. The truth of the matter is, while my condition isn’t as serious as others, I do in fact, have a physical disability.

But, accepting that truth doesn’t mean I have to give up my stubborn pride!

It is a streak that makes me always want to do things for myself. I carry my own laundry basket. I drive a car with a manual shifter and no control modifications. I can cook, clean house, maintain the car and do a multitude of other things that a more severely disabled person might not be able to do. For that, I’m hugely grateful. Yet, I must still accept that there are a great many things that I am simply physically incapable of doing.

I cannot walk for long distances, let alone run. When I’m working in the kitchen, I have to sit down every so often. These, and others, are things I cannot do. I do not have the physical ability for them. That’s basically what a disability is, and exactly what I’ve been trying to get my head around these past months and years.

It truly bothers me that handicap and disability is so heavily stigmatized. In a world where equality is at the forefront of daily life, we still have inequality and discrimination towards those who aren’t “normal.” Perhaps that’s why it has been so difficult for me to accept that I have a disability. Because of the perceived stigma attached.

What I do know is that we must strive to show people that while we may have a physical disability or handicap, they don’t change who we are as humans. They don’t make us less useful or relevant in modern society.

This change in mindset came about for me because a friend asked what government benefits I receive for my disability. Which is when I exclaimed, “wait, I’m not disabled!” Their acceptance of me and the things I can do made me realize that while I am disabled, I am still relevant and useful. And that will make it easier for me to accept the help I will most certainly need in the future.


I have to accept that my physical limitations are now disabilities. Yes, I am disabled. And I’m okay with that!
Posted by Gin at 5:00 AM No comments:

The Network’s Board of Directors held its annual in-person meeting the first weekend of August this year, and while words are inadequate to convey the degree of dedication, excitement and anticipation in the air, I can give you a taste of the projects we’re currently working on or have planned for the rest of the year.

One of the biggest topics of discussion was the future of XLH Days. The last two (MidWest XLH Day and West Coast XLH Day) were great experiences, and we are looking forward to meeting more of our members at future events. The board formalized its intent to hold one XLH Day each year, generally in the summertime. While there are many, many details still to be worked out (and both volunteers and financing to secure), based on the enthusiasm shown by members in Texas recently, we have begun looking into holding the next XLH Day in the vicinity of Houston in late July or early August of 2016.

We also created an ambitious calendar for the board. This fall, we will represent our members at the American Society for Bone and Mineral Research (ASBMR) conference in Seattle and the National Organization for Rare Disorders (NORD) event in DC. We’ll also be attending workshops on how best to interact with the medical research community in the context of the Patient Centered Outcome Research Institute (PCORI.org). For the future (2016 and beyond), we’re looking into the costs and benefits of eventually expanding our representation to conferences of pediatricians, dentists, and orthopedic surgeons.

A great deal of time was spent on some major projects that are either in early, confidential stages or are a bit further along, but not quite ready to be unveiled. You’ll hear more about them over the next six months, and I’m certain you will be as impressed as I am by the dedication of your Board members in pursuing these time-consuming but incredibly valuable initiatives. Based on our hard but often invisible work over the last two or three years, the XLH Network, Inc. is positioned for significant growth in the coming year.

Last, but not least, we spent a substantial amount of time reviewing our financial condition and figuring out how we are going to pay for our existing programs as well as the ambitious new initiatives. We’re confident, however, that our members will step up to ensure that each XLH Day will be even better than the one before, that we can continue to advocate on your behalf, and that XLHers will always be able to turn to the Network to support you through the challenges of living with XLH or caring for someone with the condition. In that vein, it would be remiss of me not to mention that information on donating to the Network can be found here: http://xlhnetwork.org/index.php/donate/

I look forward to moving ahead with the plans made at this meeting and sharing the details of the new initiatives as they are finalized.

Becky Mock
President, XLH Network, Inc.
Posted by Gin at 5:00 AM No comments:

Your blogger left all her deep thoughts on the table at the annual in-person Board Meeting, so all you get this week is a picture of the Network's board members at the beginning of our work, before we were too exhausted to smile for the camera.

In the front (left to right) are Becky Mock (President) and Gin Jones. In the back (left to right) are Geoff Edelson (Treasurer), Joyce Inman (Secretary), Kathy Buchanan and Chris Younger. While Oliver Gardiner and Vice-President Bill Coogan participated via Skype, they were obviously unavailable for the picture. 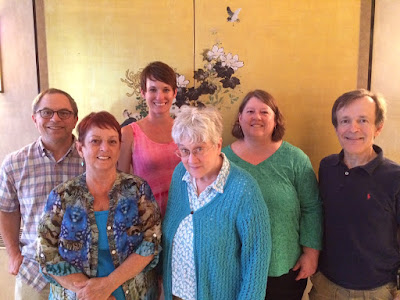 If for some reason you can't view the picture here, you can check it out at the official facebook page for the Network: https://www.facebook.com/xlhnetwork  If you have a facebook account, we hope you'll follow us there.

And make sure to check back next week at this time, either here or at the official facebook page, for a nessage from the Network president Becky Mock, which will contain highlights from the Board meeting.
Posted by Gin at 5:00 AM No comments: